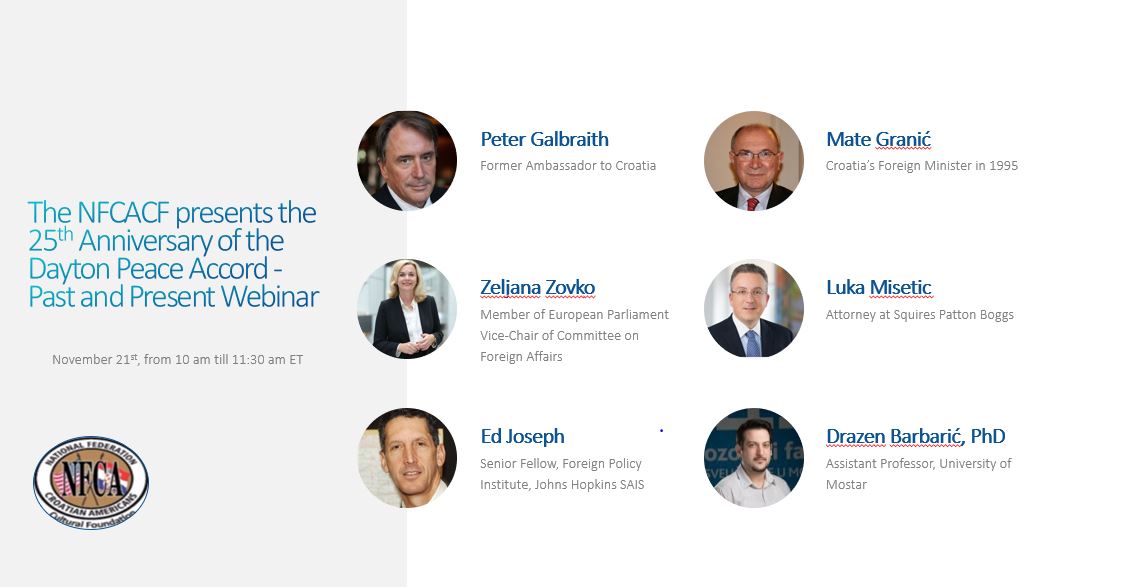 Please let me invite you to attend a virtual webinar on Saturday, November 21st that will commence from 10:00 am to 11:30 am eastern to highlight and analyze the Dayton Peace Accord — past and present — and to be held 25 years to the actual day that the DPA agreement was initialed in Dayton, Ohio.

We are honored to have the following speakers who will participate at our event:
Peter Galbraith, former US Ambassador to Croatia will speak about the Dayton Peace Accord and Erdut Agreement.
Mate Granić, Croatia’s Foreign Minister in 1995 will represent the Republic of Croatia and speak about Croatia’s DPA role.
Ed Joseph, Senior Fellow from Johns Hopkins School of Advanced International Studies will be the moderator of the DPA 1995 discussion.
Zeljana Zovko, Member of the European Parliament and Vice-Chair of the Committee on Foreign Affairs will speak about the EP perspective and the upcoming Mostar elections.
Luka Misetic, Attorney with Squire Patton Boggs will present “Boots on the Ground: How Croatian Army and Bosnian Army Military Operations Paved the Road to Dayton in 1995.”
Drazen Babarić, Assistant Professor at the University of Mostar will present about on-going electoral and constitutional issues in BiH which are DPA-related.
Please RSVP below to get the Zoom link to participate.