Please let me wish and hope everyone is finding wonderful ways to enjoy the summer of 2021 in many safe, productive and fun family ways!

As many of you know, the NFCACF and the Croatian Fraternal Union co-hosted a celebratory webinar on June 26th saluting Croatia’s thirty plus years of Independence! 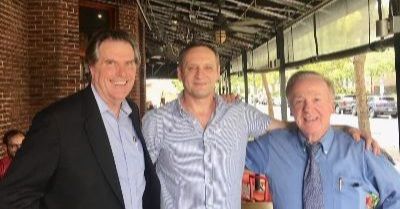 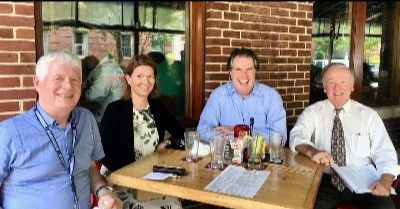 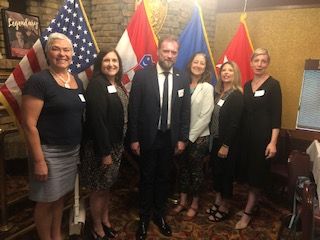 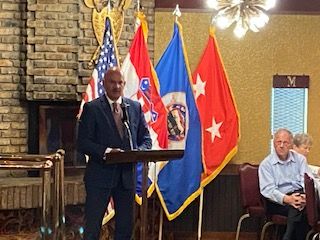 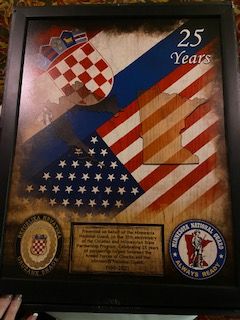 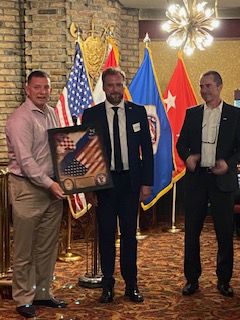 Let me salute and thank everyone who supported the event and donated to our Special Olympics fundraiser during the month of June and let me single out our two platinum sponsors, Dr. Toni Sicenica and Vedran Joseph Nazor too! We raised 80% more dollars this year over 2020 and so that’s one silver lining from within this lingering pandemic.

Here are a few updates about two very important US-Croatia issues within the realm of American and Croatian relations and our overall partnership. First, we should hear some definitive, official news about Croatia joining the Visa Waiver Program with the U..S within the next 30-45 days and will keep you all posted. Also, the negotiations between the U.S and the Republic of Croatia with regard to the Avoidance of a Double Taxation Treaty continue to move forward in positive ways! We hope there will be some definitive good news there within the next twelve months.

I am proud to say over the last eight months, we have added five new members of our Congressional Croatian Caucus, including House Foreign Affairs Chair, Rep. Gregory Meeks (NY) and recently, Rep. Ted Lieu (CA), Rep. Frank Mrvan (IN), Rep. Joe Morelle (NY) and Rep. Claudia Tenney (NY) just applying this month. The NFCACF has also collaborated with the bi-partisan congressional effort to support the extension of $300 million dollars from the U.S. Development Finance Corporation, to the Three Seas Initiative Investment Fund, in the overall Euro-Atlantic effort to minimize Central and Eastern Europe dependence on Russian energy sources.

The annual NFCACF Assembly of Delegates meeting will take place in person in Philadelphia, the weekend of September 17-19th! Please circle back with me for those interested in applying to be an at-large delegate! The Friday night BYOB dinner outdoors and the Saturday night outdoor celebration is open to all NFCACF, CFU and ACAP members and more specific details to be released in August!
Thank you again to our 2021 Rudy Perpich Fellow, Tatjana Mustac for all her work, research and support of NFCACF activities and projects this spring.

Here’s a quick look at some meetings and developments from the summer of 2021!

It was a pleasure to meet the new Croatian DCM Danijel Medan on my recent July visit to the nation’s capital and he replaces Lara Romano, who’s now back in Zagreb with Ministry of Foreign Affairs. Also, it was very productive to have outdoor lunch meetings with Colonel Zoran Batarilo from the Bosnia and Herzegovina Embassy and then the next day with European Parliament liaison office officials, Joe Dunne and Sanna Kangasharju.

Croatia’s Defense Minister Mario Banozic, was in Minnesota in July to celebrate the 25th Anniversary of the Minnesota National Guard Partnership with the Republic of Croatia. Minister Banozic is pictured with Adjutant General Shawn Manke and Admiral Robert Hranj, and Ambassador Pjer Simunovic greets the group. A small group from the Croatian Community was also invited to participate in this celebration. 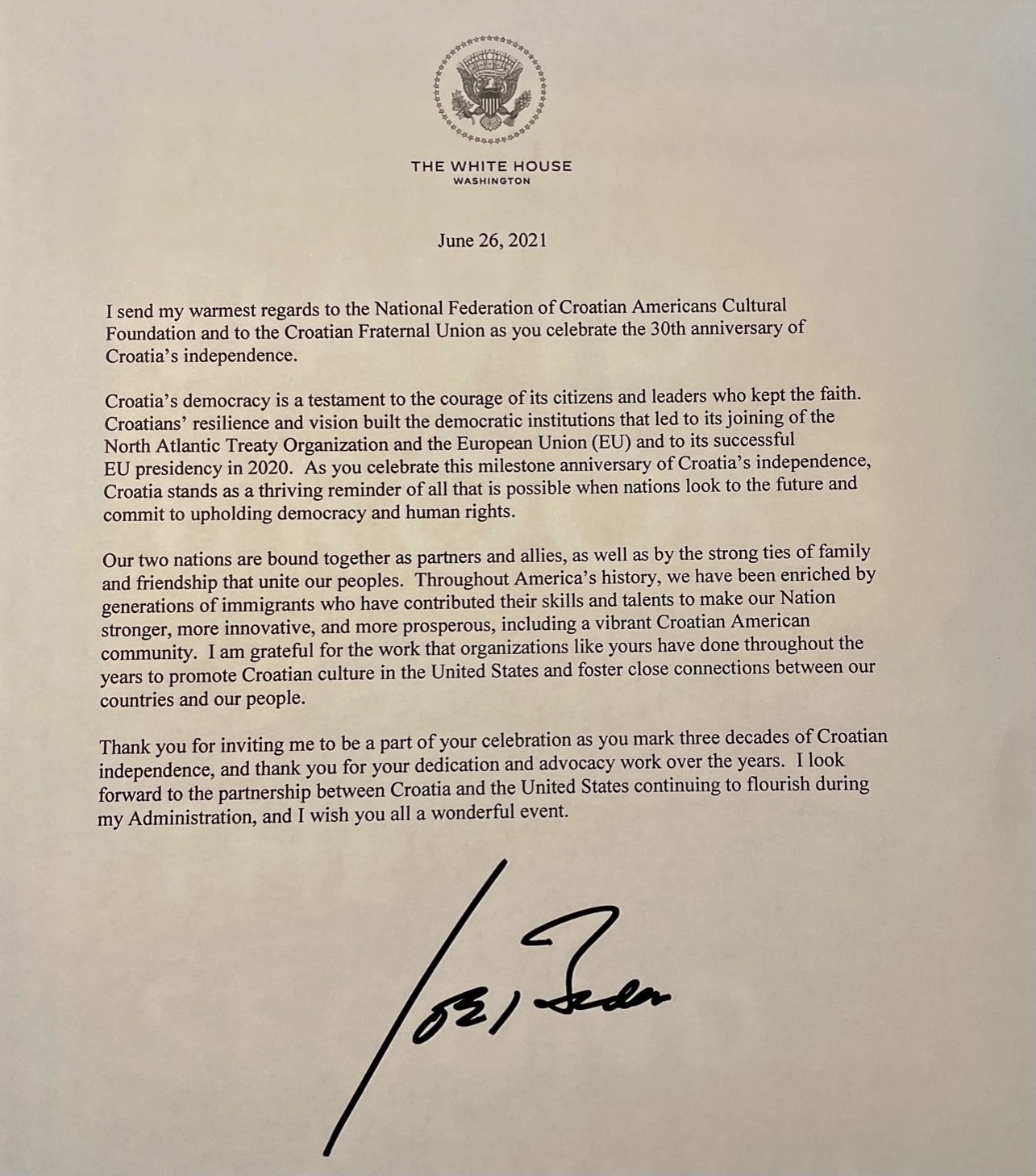 Always a real honor to receive a letter from The White House and the President of the USA; NFCA-CFU really appreciate President Joe Biden’s wonderful letter congratulating Croatia for 30 years of “Independence” and his kind words to our Croatian American community. 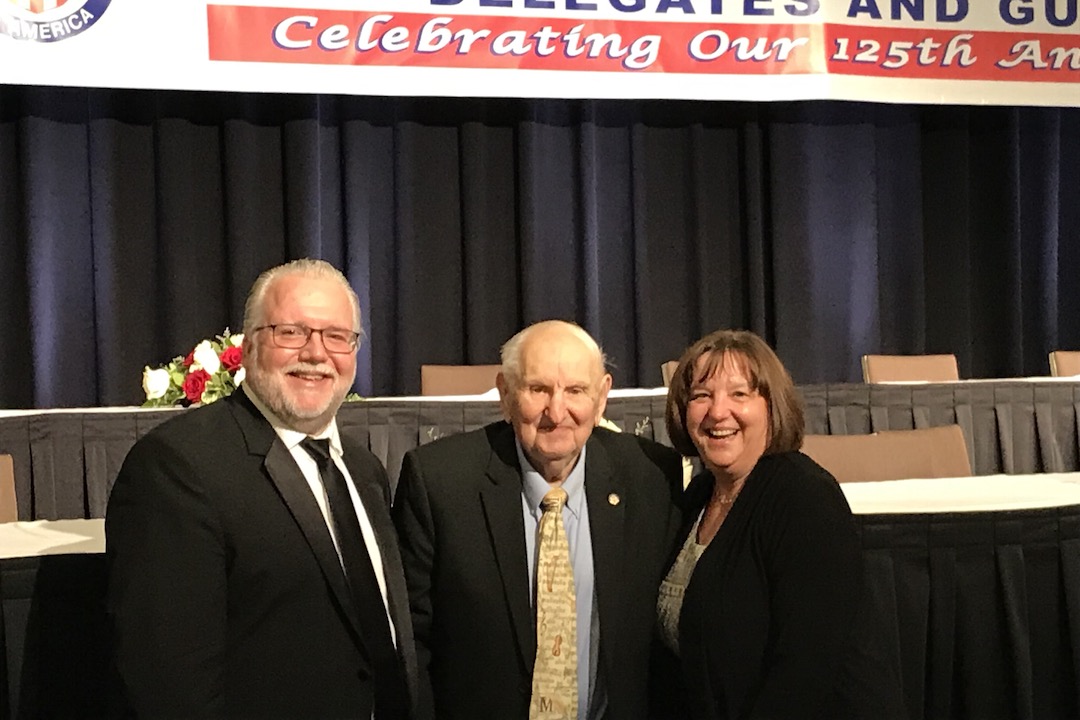 We must salute Frank Jerbich and pay our respects to one dedicated Croatian Fraternal Union fraternalist and who was our NFCACF Vice President and officer for over 20 years who recently passed. Frank was the long time President of Hrvatska Sloboda CFU Lodge 32 one of the largest Lodges in the USA with over 1000 members. Frank’s Lodge 32 was known for their wonderful well-attended lodge events from bowling to golf fundraisers and so many celebration dinners and outdoor picnics to honor their Croatian heritage. Frank was bestowed with Lifetime Achievement Awards from both the NFCACF and the Croatian Fraternal Union. We will surely miss him and his activism. 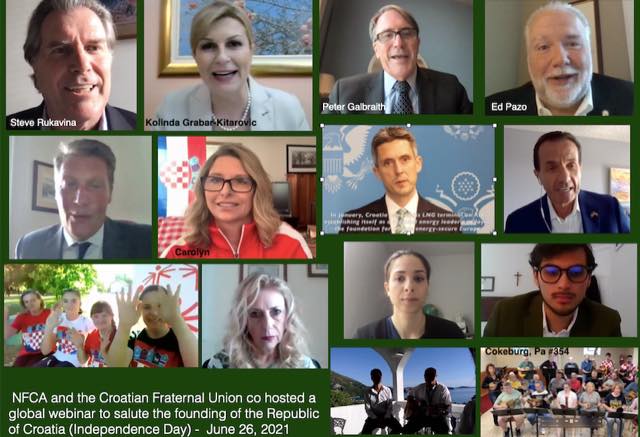 On Saturday, June 26th, the National Federation of Croatian Americans (NFCACF) co-hosted with the Croatian Fraternal Union (CFU), a global webinar salute to the founding of the Republic of Croatia’s democracy. This webinar celebrated the “30th Anniversary of Croatia’s Independence Day” and to honor another “Statehood Day” and Croatia’s successful and historic road to democracy.

This virtual webinar with wonderful Croatian music from Pittsburgh and Dubrovnik with Steve Rukavina as the Master of Ceremonies was scheduled to honor the thirty plus years of Croatian Independence! This event also included a fundraising element to continue the NFCACF’s on-going commitment to Special Olympics in Croatia!

The celebration was anchored by two keynote speeches by Kolinda Grabar Kitarovic, the former President of the Republic of Croatia and Peter Galbraith, the first U.S. Ambassador to Croatia. CFU National President Ed Pazo introduced the former Madam President and he shared a few organizational highlights and thanked our distinguished featured speaker for attending the CFU’s 125th Anniversary in 2019. Brother Pazo did a wonderful job of sharing with the audience, so many notable highlights from her Presidency and her diplomatic career!

The former Madam President in her remarks outlined Croatia’s rocky road and yet, remarkable journey to establish its independence and its democracy.
Ms. Grabar Kitarovic thanked the Croatian American community for all their support at their time of need in the 1990s. The former President shared some highlights from her Presidency including the ever strong US-Croatia relations and her leadership with the Three Seas Initiative. She detailed the on-going need for Croatians to still rally together to offer opportunity and to better build a society with a more modernized economy to benefit all Croatian citizens.

Ambassador Peter Galbraith was another co-headliner and his words so aptly put into perspective, the historical significance of the “extraordinary times” that Croatia faced like we did within our own American Revolution and yet, the Croatians persevered! The world famous diplomat and global activist outlined a number of ways the U.S. supported Croatia’s bid for independence in the mid-1990s including with the Erdut Agreement and with the Dayton Peace Accord to bring stability to the region. He concluded it’s amazing how far Croatia has come in thirty years and now as a close ally with the United States. We appreciated that Peter Galbraith “zoomed” in with us from Erbil, Kurdistan and he had spent the day mostly in Syria at a Yazidi refugee camp.

The acting U.S. Ambassador in Zagreb, Mark Fleming addressed the audience with a wonderful summation of the highlights of the US-Croatia relations and the positive developments with the Visa Waiver Program and the progress with negotiations for an Avoidance of a Double Taxation Treaty  between our two countries. The American diplomat finished with the wonderful comment that Croatia is truly a “rock solid NATO ally” for the United States.

The virtual festivities included a live singing performance from Dubrovnik.  Petar Sambrailo and Marijo Anđelić, are well known 1st and 2nd tenors in the Croatian Klapa world.  Both have performed with the group Klapa Kaše, who have won many awards at Klapa festivals throughout Croatia.   The CFU’s St. George Lodge 354 Tambura Ensemble with musical directors Marlene Luketich-Kochis and Dan Kochis and including Bernadette Luketich-Sikaras and Derek Hohn with a dozen others, also performed beautifully with several other crowd-pleasing tambura favorites.Finally, athletes from the Croatian Showshoeing Special  Olympic Team (which qualified for the Russian Special  Olympics World Winter Games in 2022)  talked to us about their sport and their achievements. Founded in 1992, the Special Olympics in Croatia has forty affiliated chapters all over the country and brings 16 sports to over 1,300 Croatians. The organization provides year-round sports training and athletic competition in a variety of Olympic-type sports for children and adults with intellectual disabilities to develop physical fitness and to find joy in the participation of sports. Sladjana Tadic, represented Croatia’s Special Olympics organization on the webinar and she thanked the NFCACF for all their support over seven years now.The NFCACF wants to acknowledge all the incredible work and planning from Carolyn Bruno and Anna Maria Sicenica and their “Events Committee” which made this virtual webinar happen in such a first class way. We want to thank all our major and company sponsors and first the two $1,000 platinum sponsors: Dr. Toni Sicenica and Vedran Joseph Nazor. We would like to recognize the $500 gold sponsors too: Croatian Fraternal Union, the Marko Rudela Family, Michael Young, Joe Brajevich and Steve Rukavina. We want to recognize the $250 silver sponsors and those individuals with a $200 or more donation including:  Terra Adriatica, Mindful Travel Croatia, Nadean Stone, Dora Plavetic, Sanja Newman, Emily Erceg, Carolyn Bruno and bronze sponsor, Adriatic Travel. We do appreciate the many other donors who gave from $20 to $100 and all for a good cause and 100% earmarked for Croatia’s Special Olympics!